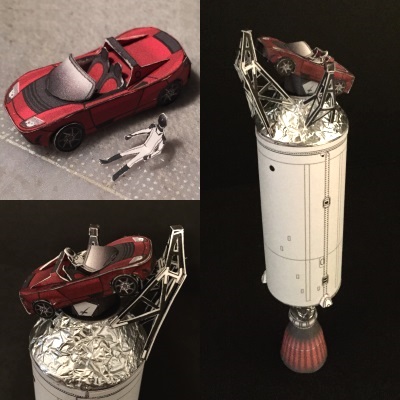 The Falcon Heavy is a rocket produced by Elon Musk’s company, SpaceX. For the Falcon Heavy’s first launch into space, Musk had his own red Tesla Roadster attached to the second stage to act as a dummy payload. In the driver’s seat of the roadster is a mannequin wearing a spacesuit. The mannequin was dubbed “Starman” before the launch. AXM Paper Space Scale Models has created a free 1:100 scale paper model of the Falcon Heavy which includes Musk’s Tesla. The files for the model may be downloaded here. Build options include building the entire Falcon Heavy or building a diorama of just the second stage (pictured above).

Mon Jun 10 , 2019
Canon Creative Park always produces well designed papercraft and this collection of seven purebred dog paper models is no exception. Pictured are their models of a Welsh Corgi Pembroke, a French Bulldog, a Pomeranian, and a Shih Tzu. Not pictured are models of a Yorkshire Terrier, a Dachshund, and Toy […]