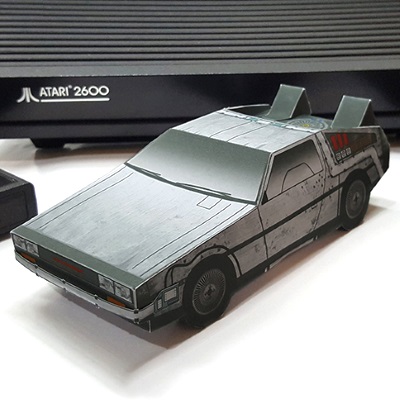 Inside the virtual reality game in Ready Player One, the hero of the movie, Wade Watts, drives a DeLorean like the one seen in the movie Back to the Future. However, Watts’ car has some additional modifications. First, the car has been equipped with the on-board computer and red scanner of the Pontiac Firebird from the Knight Rider television show. Second, the car’s license plate reads “ECTO-88”, a homage to the Ghostbusters ambulance which has the license plate “ECTO 1”. This papercraft model of the DeLorean was created by Paperized Crafts. The printable template for the model may be downloaded here.

Sun Aug 19 , 2018
I hate to use the term “printable origami” but that is pretty much what these origami Totoros are. Instead of using a pre-colored square of paper like is done in traditional origami, a square is printed from a PDF file. Graphics for the Totoro’s face and belly are positioned on […]